Years ago, I began searching for a business opportunity in rural Upstate NY. I graduated Southern Cayuga high school in 1982. I moved away for college and eventually wound up in California’s Bay Area. While life has taken me across the country with a family there, my mother, brothers and other family continue to be connections to my hometown. I discovered that things were changing where I grew up and over the years brewing had become a surprising opportunity. I recently started wearing hats that are much different than those I wear as a programmer.

There’s an old adage of things coming thick and fast. I’m convinced the origin of this idea is with masons, those who work with stone and cement. Working with concrete, even once, is enough to give you a sense of what is easily dismissed in its final, solid shape: it’s a heavy, dense, bumpy, caustic liquid mixture formed by constraining it until it sets.

Part of my brewery plan was to build a concrete stairwell to an existing cellar. To do this required the form, rebar and concrete pour. I decided to embark on a DIY project and rented an excavator on October 6 to dig a sloping grade to the bottom of the basement. The excavation was followed by more than a month working part-time demolishing the block wall, finishing the grade, installing rebar and building the form. There were many things to consider. The project began in the pleasant late summer weather of October and ends with the chilling winds of December.

The first step to building the stairwell was excavation. After marking the location according to plan, the next step was actually removing dirt. The October 6 dig was captured on video, left. In addition to digging the stairwell grade, I also trenched for septic and discharge lines.

After demolishing the wall, adding rebar and the form, I was ready to pour. I was given the green light and scheduled the concrete for Thursday, December 3. At right is a timelapse of the half-hour pour. When the concrete starts, it’s a flow that is ‘thick and fast.’ The concrete is being poured into the walls and I scramble to pull the concrete to fill the steps. What’s not shown in the video is the leveling and cleanup that required hours after the pour.

I estimated that I required 5 cubic yards of concrete to fill the form. When the pour was finished, I was surprised that the form was not full. The walls were filled just below the top rebar and 5 of the 10 steps were completed. The remaining steps were partially filled. An additional pour to fill the steps and top was completed on December 11 with concrete mixed on site (video). 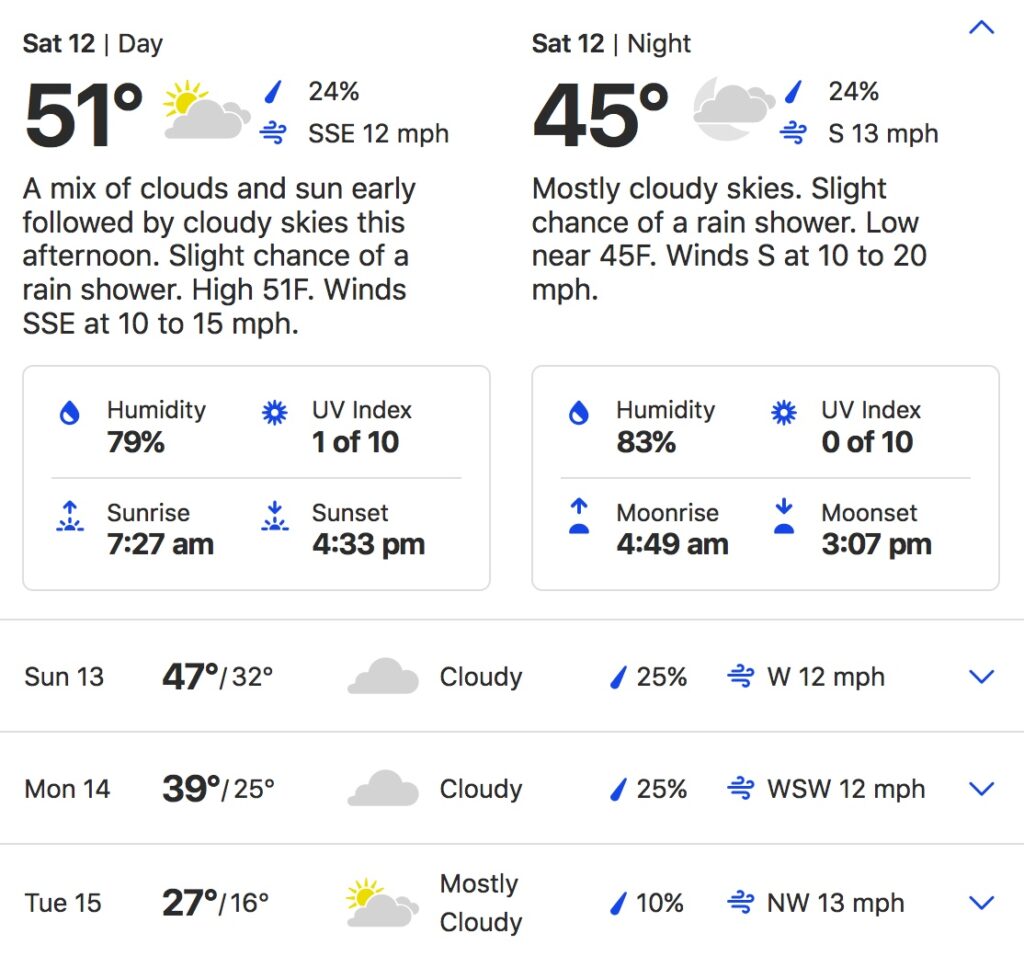 As my projects were outside, I was concerned about the weather. A reliable 10-day forecast was a huge benefit. I targeted days for exterior work between rain and snow. The dates of the initial pour and later finishing were chosen after consulting weather.com. The predictions were accurate and the outdoor work environment was pleasant on the selected days. The forecast for December 12 and 13 (the days after the finishing pour) showed a low chance of precipitation and expected temperatures above freezing until Sunday evening. I was advised that fresh concrete should not be subjected to freezing temperatures. The stairwell is now winterized with a covering of hay bales.

The form was ready to be removed. I targeted December 19 to remove the plywood, supports and other parts of the form.

Below are some pics taken during the stairwell build:

I started this journey in August and I’ll be closing my crowdfunding account soon. If you’d like to contribute, visit this crowdfunding page. I list some of the latest Area 34 Brewery videos and documents below:

Next step: more concrete for the fermentation room. Thanks for your interest and support. Cheers to 2021!

To build a good place to visit, have a beer and enjoy the company of friends.